The Billboard Charts Will Be Measuring Streams Differently 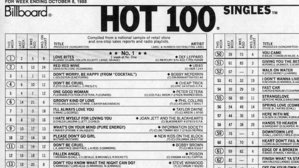 Many artists and industry execs may think that the Billboard charts are less relevant than they’ve ever been, but they’re still used as a measurement of success no matter how you look at it. That’s why it’s long been argued that the way that the charts count streams is insufficient. It appears that’s changing soon as the company has instituted a different way to measure streams to make the charts both fairer and a more useful way of determining just how successful a song or album is.

According to Billboard, “Currently,Â BillboardÂ has two defined types of streaming plays for theÂ Billboard Hot 100Â songs chart (and our other genre-specific hybrid songs charts): on-demand (such as Amazon Music, Apple Music, Spotify and YouTube) and programmed (such as Pandora and Slacker Radio), with on-demand having a greater weight. TheÂ Billboard 200Â albums chart — and our other genre-based consumption-ranked albums charts — uses a single tier (equating 1,500 streams as one album unit) for on-demand audio streams (paid or ad-supported) from subscription services. Video streams and programmed audio streams do not contribute to the Billboard 200â€™sÂ calculations, but are incorporated into the Hot 100.”

Essentially, what that means is that streams are all measured the same regardless of if they’re from a free or paid subscription tier.

What will be interesting to see is if the company breaks out the separate tiers, as that information can be useful in watching trends of how songs and albums are being consumed.

Regardless, this is a big change for the Billboard charts and one that’s been a long time coming.