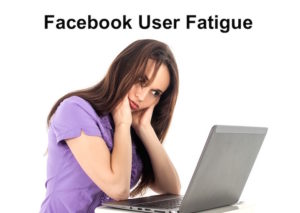 Facebook may be the largest social network by far, but it appears to be suffering from a severe case of user fatigue in the United States. A recent study found that the satisfaction level of the platform has decreased across all age groups, with ages 35 to 44 decreasing the most.

Much of this has been traced back to the recent election, when more posts became political in nature. As a result, many users began to unfriend and unfollow in an effort to avoid the resulting online social confrontations that would happen. When that didn’t work well enough, many began to visit Facebook less and less, and now many have even fled the platform to other social networks.

The big question going forward is, “Will the number of negative posts decrease as we get further from the election, or will they maintain with the public so divided?” It’s too early to tell, but my guess is that we’re in a new world where the political differences are greater than ever, and Facebook posts will continue to reflect that.

That said, Facebook does have a very sophisticated algorithm that decides what you will see in your newsfeed. While there are reportedly thousands of factors involved in the algorithm, one of the major ones is what you tend to read or view. If you view politically oriented posts regularly, Facebook will gladly serve up more to you, so the simple way to avoid those types of posts is to stop reading them.

Unfortunately, most people don’t understand how the algorithm works and are inclined to react when they see something negative, so this will not work in in their or Facebook’s favor in the future, as more and more people flee to other platforms.